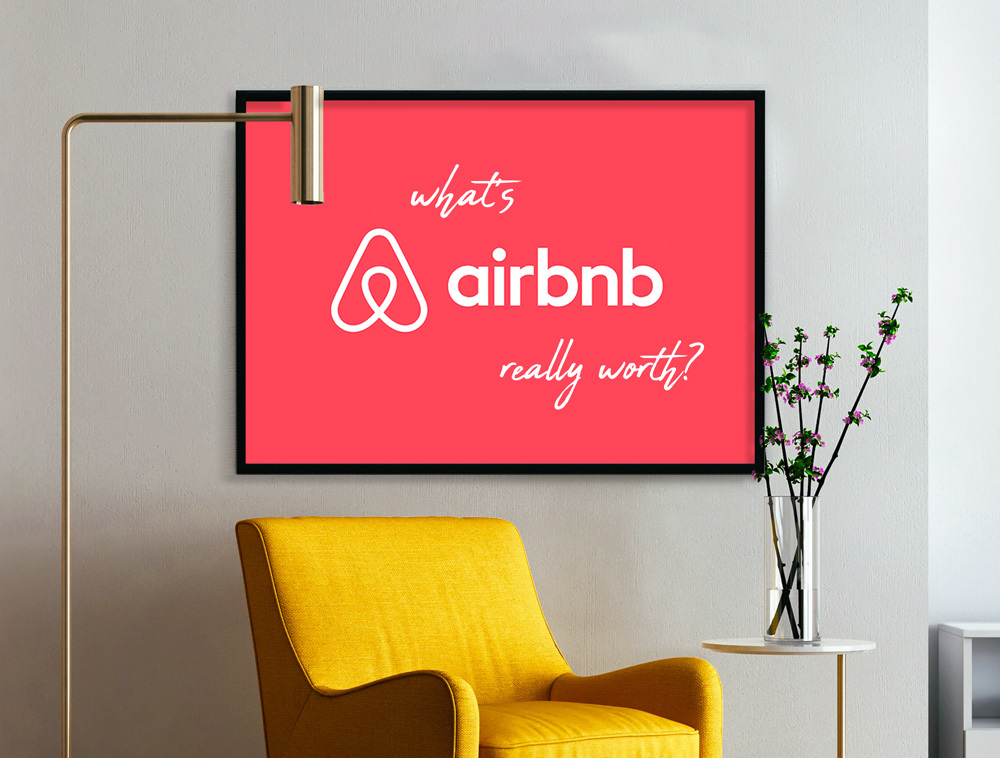 In case you haven’t already heard of or used it before, Airbnb is the world’s largest online vacation rental marketplace – with more than 5.6 million active listings across 100,000 cities all over the globe. Coming from humble beginnings in 2007, when the first two hosts welcomed three guests to their San Francisco home, the platform is today used by millions of travelers every single month.

Or at least, it was. With most of us forced to put our wanderlust on ice during the coronavirus pandemic, Airbnb’s finances took a hit in 2020: revenue fell 30%. Still, that wasn’t too terrible considering just how hard travel was hit that year – partly because plenty of people took advantage of their newfound work-from-home freedom to book long stays in remote locations. Airbnb rivals Expedia and Booking Holdings’ Booking.com, which focus more on hotels and business travel, saw their revenues decline by 55%.

For its part, Airbnb reckons that companies’ post-pandemic familiarity with remote work could create more “digital nomads” than ever before. And that trend should benefit Airbnb, because the majority of its listings are entire houses or apartments – perfect for working from a home away from home. Let’s start by taking a closer look at that business model.

Taking on the hotel industry

Airbnb’s focus on entire-home listings – many of which are chic, unique, and competitively priced – is one of the big reasons why it’s been able to steal significant vacation market share from major hotel chains such as Hilton and Marriott. You can see this trend in the (somewhat outdated) chart below. 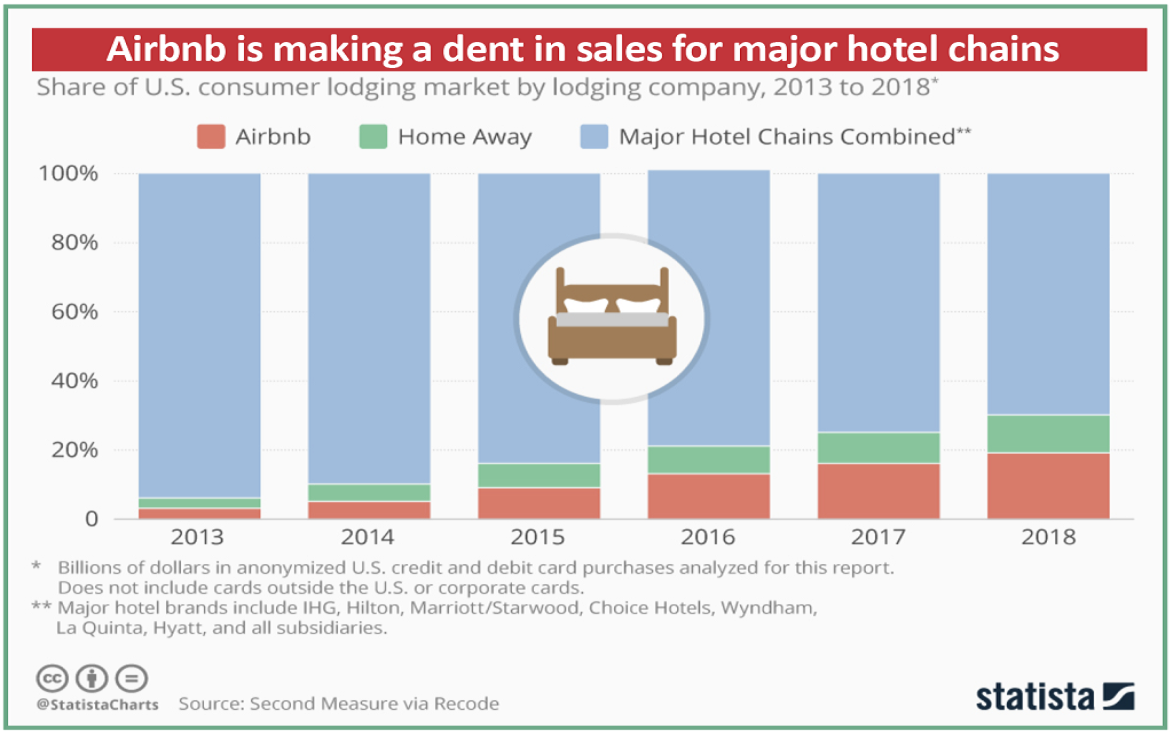 Airbnb’s business model is very different from a hotel chain, however: it doesn’t own or operate any real estate itself, meaning it isn’t burdened by any of the associated employees, regulations, and upkeep. Airbnb is just a platform – nimble, cost-light, and scalable – and its financials therefore have to be analyzed differently.

One of the main ways to analyze a hotel chain’s performance involves looking at its revenue per available room (RevPAR). That’s driven by two main factors: occupancy rates, or the percentage of available rooms occupied over a given period (such as a quarter), and average daily rate, which measures the mean price paid per room per night. A hotel chain’s RevPAR is its average daily rate multiplied by its occupancy rate – and the company can increase this key metric either by filling more rooms or by charging higher rates.

How to analyze Airbnb

Airbnb’s very different business model renders RevPAR irrelevant. The company rakes in most of its revenue through charging both hosts and guests a commission when there’s a booking on its platform. The first thing you want to look at here is the total dollar value of all those bookings on its platform, or gross bookings value (GBV). Airbnb’s 2019 (pre-pandemic) GBV was around $40 billion, compared to around $100 billion at both Booking.com and Expedia.

Airbnb’s take rate might be lower than Booking.com’s, but the home-stay specialist has some important competitive advantages over both it and Expedia. Besides the fact that many of Airbnb’s listings are unique to its platform, the company has a very strong brand: so much so that it’s joined Google and Photoshop in becoming a verb. That brand awareness allows Airbnb to get around 90% of its website traffic from direct or unpaid channels, by one investment bank’s reckoning – well ahead of 50% at Booking.com and Expedia.

What that means in practice is that Airbnb has to spend a lot less on digital marketing to draw potential customers in. Over the past three years, Airbnb spent an average of $1.3 billion each year on marketing. Booking.com’s and Expedia’s average annual marketing spends over the same period were $3.7 billion and $3.5 billion respectively.

It’s important to note that the three platforms’ focuses are somewhat different. Airbnb concentrates on vacation rentals of hosts’ own rooms, apartments, and houses, while Booking.com and Expedia mainly focus on hotel and flight bookings. Having said that, Airbnb also owns a hotel booking platform called HotelTonight, which it acquired in 2019 for $400 million. While hotel bookings only account for a small portion of the company’s overall sales, this adds a layer of diversification to Airbnb – as does its experiences platform, which allows users to book activities offered by hosts such as cooking classes or walking tours.

How to value Airbnb

Few would dispute that Airbnb is an attractive-looking business, pandemic aside. But the question is, at what price? The company listed shares on the stock market at the end of 2020 in an initial public offering (IPO) that valued it at $47 billion. But Airbnb’s share price more than doubled on its debut day – and the company’s market value at the time of writing is $95 billion. That gives it a valuation multiple of 21.5x forecast sales for 2021 (with revenue used for comparison because the company isn’t yet profitable). That 21.5x looks pretty steep compared to Booking.com’s 10.3x and Expedia’s 3.4x sales multiples.

Even if you think Airbnb’s a better business than the other two big online travel platforms, isn’t that all reflected in its higher valuation? The only real way to weigh in on the debate is to have a go at valuing Airbnb yourself – so here’s a framework to help you do just that.

The approach taken here begins by trying to figure out what Airbnb’s stabilized earnings might look like after its growth slows down – in, say, 2025. We’ll be using various assumptions: the goal is to give you a toolkit in which you can then play around with your own.

In order to estimate Airbnb’s 2025 profit, you first need to estimate its 2025 gross bookings value (GBV). You can do this in one of two ways. Either break down GBV into number of bookings and average value per booking, and then assume an average annual growth rate for each until 2025. Or you can instead imagine what the entire size of the short-term stays and “experiences” market is, and what percentage of this Airbnb might be able to capture by then.

Or you can do both and then sense-check them against each other. According to Airbnb’s IPO prospectus, the company values its serviceable addressable market – the total potential business in its current core areas – at $1.5 trillion, including $1.2 trillion for short-term stays and $239 billion for experiences. 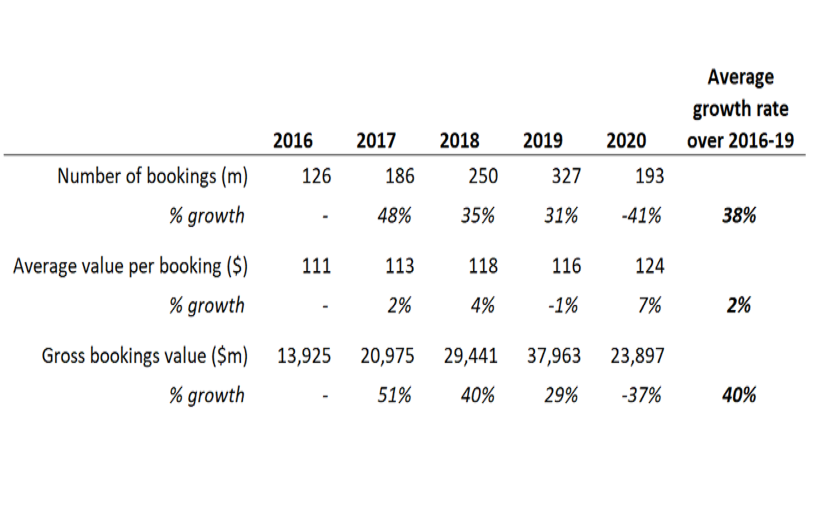 Pre-2020, Airbnb grew both booking numbers and GBV at an average annual rate of 40%

If you assume Airbnb’s take rate can increase from 2020’s 14% to 16% by 2025 (closer to Booking.com’s current 18% take rate), that GBV would deliver Airbnb 16% x 113 = $18 billion in 2025 revenue. From that, you can then move to calculating an estimate of profit. Or more specifically, EBITDA: earnings before interest, taxes, and non-cash expenses such as depreciation and amortization. EBITDA essentially calculates a company’s operating profit before factoring in the impacts of various financing and accounting decisions.

Airbnb has a long-term EBITDA margin goal of 30% – not entirely unreasonable, considering that Booking.com’s EBITDA margins consistently hovered at around 40% prior to 2020. If you think Airbnb can achieve its goal by 2025, then its EBITDA that year would be 30% x 18 = $5.4 billion.

With that estimate in hand, you can next value the entire company by applying a commonly used valuation multiple called EV/EBITDA – or enterprise-value-to-EBITDA. Enterprise value is the value of a company’s outstanding shares plus its “net debt” – total debt minus cash holdings. Enterprise value is essentially what someone would have to pay to buy the entire company.

So what EV/EBITDA multiple should we use when valuing Airbnb? A popular way to approach that decision involves seeing what multiples similar companies trade at. Booking.com is arguably Airbnb’s closest peer: its EV/EBITDA multiple is 18x, based on analysts’ average forecast for next year’s (2022) EBITDA, when the company’s earnings are expected to normalize post-pandemic. Applying that 18x to our 2025 Airbnb EBITDA estimate of $5.4 billion yields a 2025 enterprise value forecast of $97 billion.

Because enterprise value is the value of a company’s outstanding shares plus its net debt, we need to subtract the forecast value of Airbnb’s 2025 net debt in order to arrive at a pure stock valuation. As of the time of writing, however, Airbnb’s net debt is actually a negative $4 billion: it’s got more cash on its balance sheet than borrowings. For simplicity’s sake, we’ll assume that doesn’t change through 2025.

Adding that net cash of $4 billion to Airbnb’s estimated enterprise value of $97 billion gives you a total stock value of $101 billion in 2025. Airbnb’s current market value, by contrast, is $95 billion.

You can interpret the present-day significance of this in two different ways. First, if you think a $101 billion valuation for Airbnb in 2025 is fair, then you’re probably not going to make much money by investing in its stock today. Second, the similarity of Airbnb’s current valuation and the 2025 estimate worked out above hints at what sorts of goals the company will have to hit to justify today’s stock price – including higher GBV, a higher take rate, and an expanded EBITDA margin.

Of course, Airbnb’s performance on these key metrics could turn out to be much better or worse than expected by the time 2025 comes. That unknown is a constant in the world of investing. Airbnb also has several company-specific risks – including safety (of hosts, guests, and property) and, in particular, impact on cities’ rental markets, where the platform has a habit of pricing out potential long-term residents.

Related restrictions probably represent the biggest threat to Airbnb’s long-term success. For now, however, the home-stay specialist platform is looking ahead to a bright future post-pandemic – so why not play around with a few of the figures we’ve looked at above and make your own mind up on whether investing in Airbnb could help your finances as well?

In this Pack, you’ve learned:

🔹 Unlike hotels, Airbnb makes most of its revenue from charging both hosts and guests a commission on bookings made through its platform.

🔹 The total dollar value of bookings on its platform is referred to as gross bookings value (GBV). The percentage of this Airbnb charges in commissions is its "take rate".

Now test your knowledge with our short quiz! 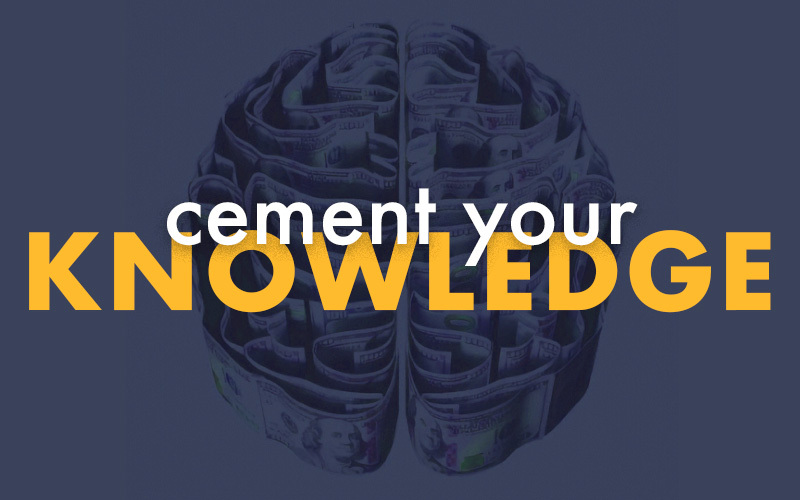 Bitcoin was first to cut the middleman out of financial transactions. But Ethereum, Jon explains, really kicked things up a notch.

Bitcoin 101: The Crypto That Started It All

Understanding Bitcoin is the first step toward crypto riches. And Jon’s here to teach you the fundamentals. 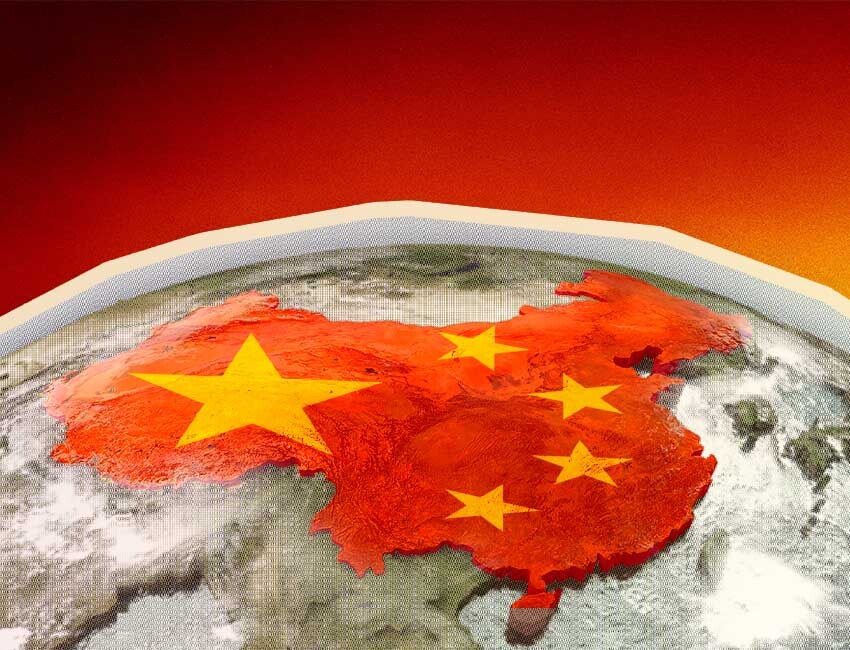 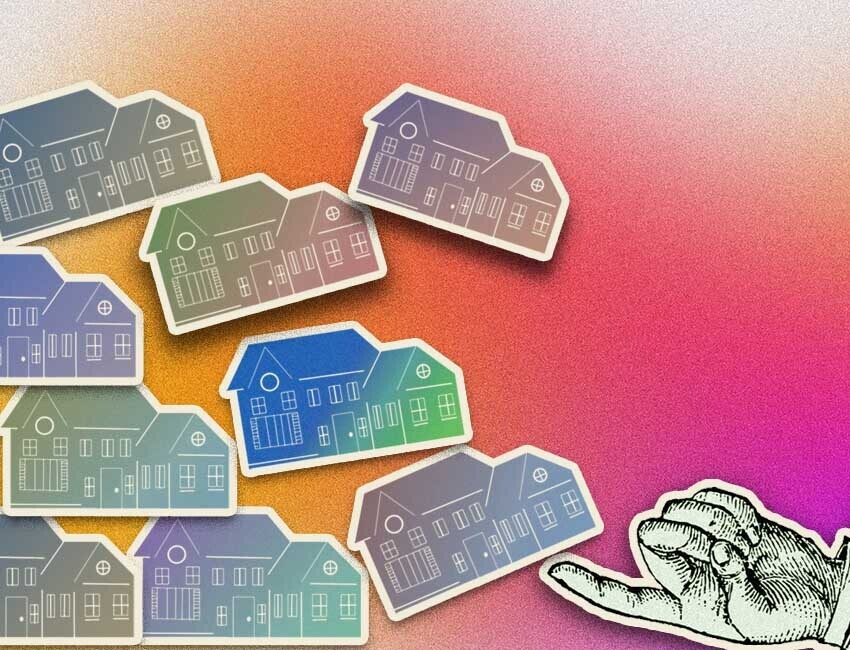